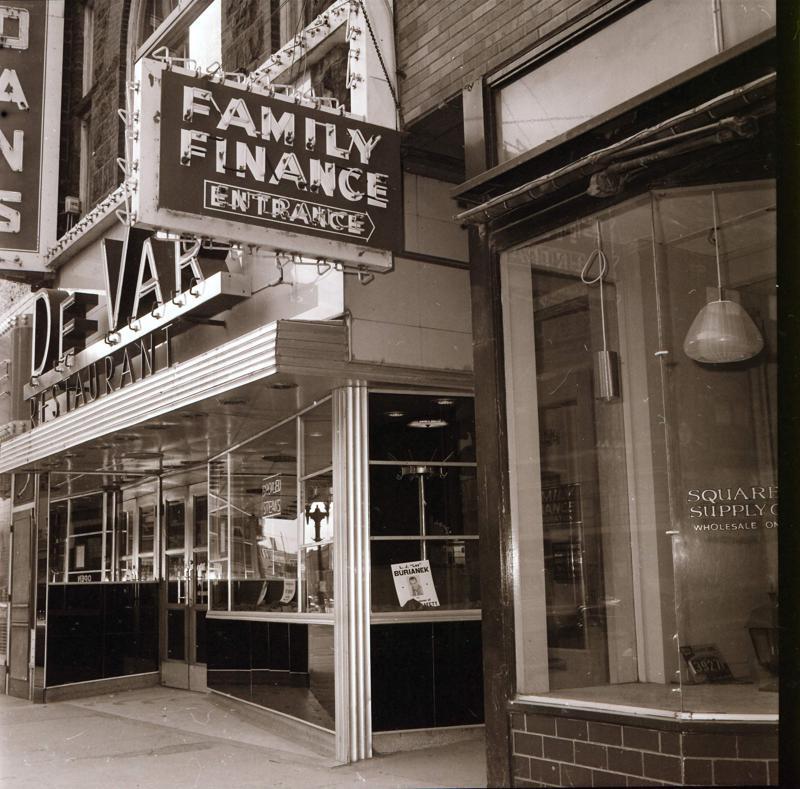 Downtown Cedar Rapids in 1959 was a busy place, with shoppers and business people on the streets, especially at lunchtime. But no one – apparently – has seen who murdered a calm and polite loan officer going about his daily business.

The De Var restaurant at 312 Second Ave. SE was serving lunch on October 15 when Thomas McMurrin and Donald McSpadden barged in through the door and went directly to see Patroller Donald Hollister.

The two men said they went to the Family Finance Corp. office upstairs in the restaurant to apply for a loan. When they entered the office shortly after 11:30 a.m., they discovered the manager, Frederick Leonard Coste, lying in a pool of blood in an interview booth.

Harris said Coste, 47, was punched in the eye and then stabbed six times in the chest with a broad-bladed knife, possibly a hunting knife. He said Coste had been dead for less than two hours when his body was discovered.

Coste was working alone in the office that day. Her secretary had taken another job three weeks earlier.

Police Chief Carl Badger reported at 2 p.m. this afternoon that no clues or weapons of the crime had been found.

Louis Christianson, director of the Family Finance office in Davenport and former director of the Cedar Rapids office, arrived Thursday evening. After checking the books, he told police he was $ 258.85 missing.

Further investigation showed that the files of two loan recipients were also missing.

One person said they saw someone flee from the area at 11:25 am, although no one could be found to corroborate this story.

Police detective Captain John Kuba said the evidence showed Coste was killed between 11:10 am and 11:35 am.

Chief Badger urged anyone with information to come forward.

“We urge any citizen who may have seen a person or persons of suspicious appearance in the area between 11 am and 12:30 pm to contact us immediately,” he said. “We want anyone who thinks they have information about the case to come forward, no matter how mundane it may sound. We need all the help we can get.

Police interviewed three suspects over a 12-hour period, but all were released. Two of them were the men who found Coste’s body, police said.

The third suspect, whose name has not been released, was found in possession of a knife with traces of blood and flesh. He was taken to the FBI lab in Washington for analysis. The results showed that the blood was not human.

The three men agreed to take lie detector tests administered by Professor Richard Holcomb of the University of Iowa. The results showed McMurrin and McSpadden were telling the truth, but the anonymous suspect’s results were questionable.

Detective Kuba speculated that the assailant hit Coste in the eye and then stabbed him. Blood from the attack was found on the office walls, the cash drawers under the counter, the office drawers and the office door, but there were no fingerprints.

Less than a week later, little progress had been made in finding Coste’s killer. The chief said dozens of people had been questioned, but “we were unable to establish a precise motive for the crime.”

The five detectives who were assigned to the case continued to collect and process evidence.

“We do a full check of the victim’s background, procedures and company records,” Badger said.

On October 24, a person who wished to remain anonymous offered a reward of $ 2,500 for any information leading to the arrest and conviction of the killer. This amount was added to a $ 200 reward already offered by the Iowa Consumer Finance Association.

The announcement of the award brought several new leads, but none came to fruition.

Less than a month after the murder, Family Finance was advertising a management intern in their new office at 115 First Ave. SE.

“One by one, the meager clues turned out to be of little or no value,” The Gazette reported.

Police believed the theft could have been the motive, but it could also have been someone angry that they were denied a loan.

Five years later, the Detective Office file was a foot thick. But the tracks had all turned cold.

The family is moving

Coste, a World War II veteran, had worked for Family Finance for over 18 years, arriving at Cedar Rapids in August 1958.

He has been described by his neighbors on A Avenue NE as calm and well behaved. His family – his wife, mother and 7-year-old daughter – returned to their home in Atlanta, Georgia, where Coste was buried.

The Family Finance Corp. was upstairs at De Var restaurant at 312 Second Ave. SE, Cedar Rapids. The loan office moved to First Avenue after the 1959 murder of the office manager. (Gazette archives)

Frederick L. Coste was assassinated on October 15, 1959, in an alleged robbery at the office of Family Finance Corp. in downtown Cedar Rapids. (Gazette archives)

This photo shows the location of the body of Frederick L. Coste, 47, director of Family Finance Corp. in downtown Cedar Rapids, was killed on October 15, 1959, between 11:10 am and 11:35 am. Chalk marks indicate Coste’s position. body on the floor of a maintenance cabin. Police called the attack, in which Coste was stabbed six times, “violent”. The killer has never been found. (Gazette archives)