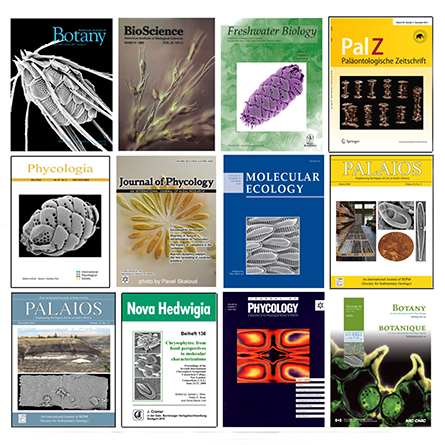 For nearly 50 years, Peter Siver, Charles and Sarah P. Becker ’27 professor of botany and environmental studies at Connecticut College, has worked tirelessly to find out what microscopic algae – some of the world’s smallest organisms – can revealing about everything from global warming to solving crimes.

Today, in recognition of his outstanding contributions to the field of phycology, the study of algae, Siver received the Phycological Society of America Award of Excellence, the organization’s highest honor.

The annual award honors a high-level scientist whose scholarly achievements, including teaching and service, have had a profound impact on the phycological community. The Phycological Society of America (PSA) was founded in 1946 to promote research and teaching in all areas of phycology.

“It is a wonderful honor and one that I will always treasure,” said Siver.

“I especially thank Anne Lizarralde for the appointment; the scientists who wrote letters of support (Alex Wolfe, Alan Baker, Yvvonne Nemcova and Eduardo Morales); all of my many colleagues over the years; my awesome students; and, above all, my parents, my wife Regina and my daughters Michaela and Emma for their unwavering support.

Siver, professor at Conn since 1990, is an expert on microscopic algae, especially chrysophytes and diatoms, which inhabit lakes, oceans and other waterways. His prolific research has contributed to our understanding of the history of evolution, climate change, biodiversity, and biogeographic patterns, and has even been used to help solve murders.

In a letter announcing Siver as the 2021 winner, PSA President Eric W. Linton wrote: “PSA Award of Excellence referees marveled at his many accomplishments.

“Among the many commendations considered, it was noted that Peter is a world expert on scaly chrysophytes and wrote the book (literally) on Mallamonas. He has nearly 160 publications with 65 student co-authors, has described 107 new genera and species of algae, and has had six more named in his honor. Peter has taught phycology, limnology and environmental sciences to thousands of students and has won numerous awards for teaching, research and service, ”said Linton.

Lizarralde, a senior researcher in the Department of Botany at Connecticut College who has worked closely with Siver since 1990, announced Siver’s impact on his students and on the public’s understanding of the importance of algae.

“Over the course of his career he has taught 200 courses (divided into 19 different courses) at liberal arts institutions and has served as the director of the Connecticut College environmental studies program for the past 31 years,” a- she writes.

“He has worked with numerous research students over the past 40 summers, as well as in independent studies and honorary theses. Sixty-five students have been co-authors, and virtually all of them have lectured, attended graduate school, and have scientific careers. Whether he teaches environmental studies, introduction to botany, aquatic plants, limnology, marine sciences or freshwater ecology, he takes every opportunity to advance the field of phycology, and all its thousands of students have been introduced in one way or another to his favorite subject, algae. .

Lizarralde also noted that Siver had been promoting algae for decades through his website, public awareness activities, and work with the FBI, NASA and various media. His stunning images of algae appeared on 12 newspaper covers; in secondary and college textbooks; in TV shows, including Hello america; and on t-shirts, mugs and other items.

In the 1990s, Siver helped solve an attempted murder case by using leftover algae on mud taken from shoes to place suspects at the crime scene. He then worked with the FBI in Quantico, Va., As an honorary agent to solve additional cases, to help train agents on the use of aquatic sediment to solve crimes, and as a co-author from an article in the Journal of Forensic Science. The original attempted murder case was featured in one of the early episodes of the popular show Forensic files and has since been broadcast hundreds of times and translated into nine languages.

In 2009, Siver worked with NASA’s Goddard Space Center on the production of the 3D film, The biggest, who showcased his algae video footage.

Siver has received 77 grants, including ongoing support from the National Science Foundation for over 30 years. He has won numerous awards, including the Gerald W. Prescott Award from the PSA for his book, Diatoms of North America: The Freshwater Flora of Waterbodies on the Atlantic Coastal Plain, an OPUS award from the NSF for archiving his decades of research on 350 lakes on the east coast. in three international museums, a Darbaker Prize from the American Botanical Society and a Research Prize from the North American Lakes Management Society.